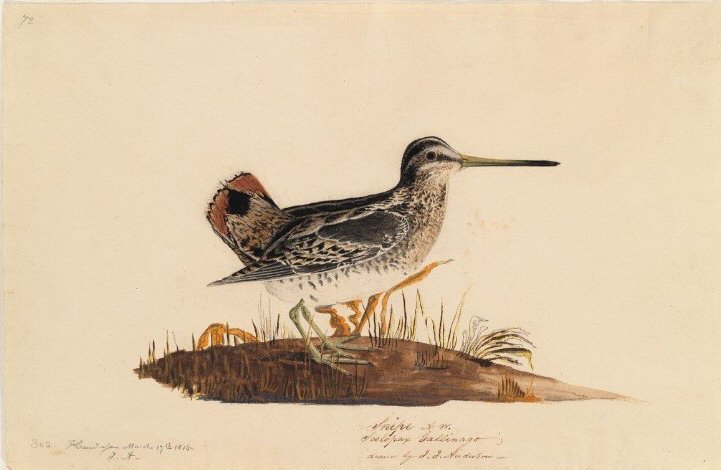 John James Audubon, the world-renowned artist and naturalist, lived in Henderson with his family from 1810 to 1819. As a Henderson resident, he engaged in various business ventures, including a store, real estate, and a steam-powered lumber and grist mill. Despite the constraints on his time, Audubon still pursued his passion for learning about and drawing birds. Pictured here are a few of his early drawings completed while he lived in Henderson, providing insight into his development as an artist and naturalist.

The depiction of the snipe above is dated 17 March 1810. In his description of this bird in Ornithological Biography, the companion text to Birds of America, Audubon notes: “The food of our Common Snipe consists principally of ground-worms, insects, and the juicy slender roots of different vegetables, all of which tend to give its flesh that richness of flavour and juicy tenderness, for which it is so deservedly renowned… Many epicures eat up both Snipe and Woodcock with all their viscera, worms and insects to boot, the intestines in fact being considered the most savoury parts.”

Another drawing completed a few months later, in June 1810, features a “Red-Winged Starling,” or a red-winged blackbird. Audubon titled this work “Le Commandeur.”

This is titled “Black Capt. Nut Hatch,” otherwise known as a white-breasted nuthatch, and is dated February 16, 1813.

In some of his early drawings, Audubon combined English and French in the titles. This is one example, which is titled, “Grande Pie Grieche Grise Buffon, Great American Shrike or Butcher Bird.” This drawing is dated November 30, 1812.

In Ornithological Biography, Audubon describes the female ivory-billed woodpecker as “the most clamorous and the least shy” of the pair. He completed this early drawing of a pair on November 28, 1812.

In his drawing of the “Red-Crowned Black Wood Pecker,” otherwise known as the pileated woodpecker, Audubon depicts the bird with its tongue out. He drew this bird on October 15, 1814.

Audubon identifies the subject of this drawing, dated May 23, 1811, as a “Bank Swallow or Sand Martin,” and describes the bird in Ornithological Biography: “The sociability and gentleness of these birds, the lightness and vigour with which they perform their various evolutions, the low and unobtrusive twittering of their voice, in short, all their actions and economy, are delightful to contemplate.”

In this drawing, dated May 22, 1811, Audubon identified these birds as the “Small Green Crested Fly Catcher” (Acadian Flycatcher) and the “Pewit Fly Catcher” (Eastern Phoebe). Audubon first observed the eastern phoebe while living at Mill Grove. He is credited with the first bird banding in the United States, as he tied silver thread to the birds’ legs to identify those that returned to the same area the following year.

Audubon drew this depiction of a “Male Yellow Billed Rail” (now identified as an immature sora) on October 9, 1811. In Ornithological Biography, Audubon notes its secretive habits: “Fond of concealment, as all its tribe are, the Sora is rarely seen during day, although, being seminocturnal, it skulks amid the tall reeds or grasses, both by day and at night, in search of its food….”

A comparison of this early drawing, completed in 1815 and titled “Willet,” to the “Semipalmated Snipe, or Willet” print from Audubon’s Birds of America illustrates Audubon’s growth as an artist and naturalist.

All images are courtesy of the Houghton Library at Harvard University. This blog was researched and written by Emily Stewart, Curatorial Intern of the John James Audubon State Park Museum.