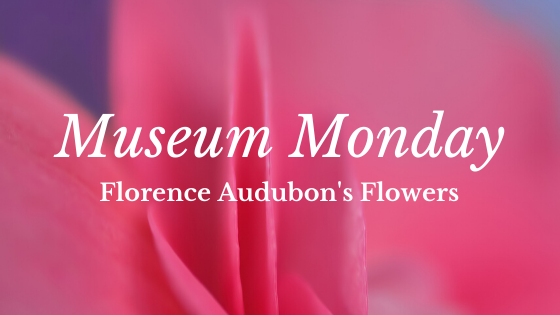 Join our curator, Heidi Taylor-Caudill, for a new Museum Monday video about Florence Audubon, John James Audubon’s granddaughter and a self-taught amateur artist in the late 19th century. Learn about Florence’s life and see our small collection of her watercolor flowers.

Welcome to Museum Monday at John James Audubon State Park in Henderson, Kentucky. My name is Heidi Taylor-Caudill and I’m the museum curator here at the park.

For this week’s Museum Monday video, we will be talking about John James Audubon’s granddaughter, Florence Audubon, and a lovely collection of her watercolor drawings of flowers. We’ve rarely had the opportunity to show people these paintings, so I’m excited to share these with you today.

Florence was not a professionally-trained artist. She certainly was not as skilled at watercolor as her famous grandfather, who used watercolors in his original illustrations for The Birds of America. The only reason that our museum even has Florence’s watercolors is because they came with a large collection of Audubon-related material purchased from the Tyler family, who are descendants of John James Audubon. If Florence had not been an Audubon, her amateur paintings would probably have been discarded by someone a long time ago – just like so many other works by women artists in the past.

Over the next few minutes, I would like to tell you a few details about Florence’s life and then take a look at her watercolors.

Let’s start with Florence’s grandfather, naturalist, artist, and writer, John James Audubon. Most people know him for his gorgeous bird illustrations. His masterwork, The Birds of America, is widely recognized as one of the finest natural history publications and the most expensively-produced publication of all time.

John James Audubon had four children, one of whom was John Woodhouse Audubon. Like his father, John Woodhouse was a self-taught artist, meaning that he had little to no professional training. Since he and John James Audubon were men, they had more freedom than women to explore and travel far from home. The subjects of their artwork reflect that freedom.

John Woodhouse married twice. He had two children with his first wife and seven with his second wife. Of the seven, five lived to adulthood. Florence Audubon was one of his daughters. She was born in 1853, two years after John James Audubon died. She never had the chance to know her grandfather personally, though she did grow up hearing stories about him and seeing his artwork. Florence’s father, John Woodhouse, died in 1862 when she was 9 years old.

By this point, the Audubon family fortune had diminished and after a series of bad luck and poor business decisions, the family went bankrupt. Audubon and his two sons were all dead, leaving behind their wives and multiple children without much source of income. Audubon’s widow, Lucy, did her part to keep the family afloat. She resumed teaching in her 70s, sold Audubon’s original watercolors from The Birds of America to the New York Historical Society, sold the copper engraving plates from that publication for scrap metal, and sold most of the family’s property in New York to satisfy their debts.

Florence spent her childhood and teenage years in this really unfortunate situation. We’re not sure whether she took art classes, but the money most likely wouldn’t have been there to do so. As an artist, Florence was almost certainly self-taught.

In the 19th century, it was hard for women to access formal training in art. Many professional women artists were the daughter or sister of a trained male artist, and they learned their profession in the family home. For most middle class women, choosing drawing and watercolor as a hobby was encouraged as part of a good education, but not something they should pursue as a professional career. Another serious obstacle was the social taboo against middle class women exploring public spaces and traveling unescorted. This lack of freedom very much limited what women artists could represent in their artwork. Common subjects for women’s art at this time were things that could be painted inside the home and outside in the garden. These watercolors are what Florence was able to produce as a self-taught artist who could not travel widely and was probably limited to the flowers in her household garden or nearby fields.

One of the first things I noticed about these watercolors is how vibrant they still are for being over 137 years old. If you look closely at these pictures, you can see that Florence observed and tried to illustrate small details. She attempted to depict variations in color, the texture of the petals, leaves, and stems, and the sinuous movement of the flowers’ shapes. In two of these paintings, Florence adds poetry and even a note: “A victory over indolence (laziness).” This was a woman who was artistic like her father and grandfather. Yes, her skills with watercolor are nowhere near John James Audubon’s, but we have to remember her circumstances.

Just as an interesting side note, Florence Audubon may have helped lay the groundwork for our museum at John James Audubon State Park. In the early 1930s, she corresponded with Susan Starling Towles, the Henderson librarian credited with founding the museum. Florence encouraged Susan’s dream and when it looked like the museum would become a reality, she sent materials to help start our collection. This is a quote from one of Florence’s letters to Susan, calling the museum, “a beautiful thing to do” in honor of her grandfather, John James Audubon.

Thanks for listening! Check back next week for another Museum Monday video. As always, stay safe and be well!