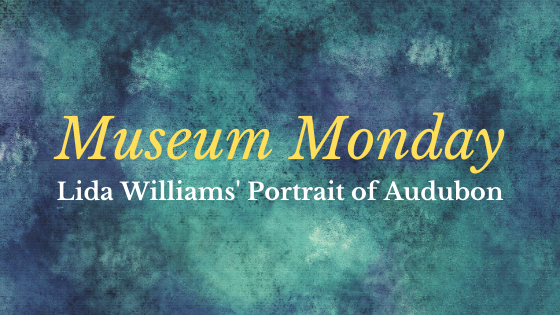 Welcome to Museum Monday at John James Audubon State Park in Henderson, Kentucky. My name is Heidi Taylor-Caudill and I am the museum curator here at the park. Today I will be sharing with you the story behind one of the portraits of John James Audubon in our collection.

This oil painting of Audubon was done by Henderson native, Lida Williams, in 1938, shortly before our museum opened to the public. What you see here is a depiction of Audubon at the age of 46. He is facing slightly to the right and looking directly at you, the viewer. He’s wearing a reddish-colored jacket over a white shirt with a wide collar and a blue ribbon. The painting is mounted in an ornate gold frame with an oval window.

When you see the picture in person, you realize how big it is. I’m around 5 foot 4 inches and when I stand next to it, the top of the frame almost comes to my shoulder. This is a painting that by virtue of its size and the elaborate framing, demands that you notice it.

So, what do we know about the portrait’s artist, Lida Williams? She was born in 1859 in Henderson, Kentucky, to Jenks Waterman Williams and Mary Weaver Williams. Her father, known as J.W. Williams, owned a hotel in Henderson. Lida left Henderson as an adult to study art for six years in New York City. She lived with her sister there until she realized she could earn a living by painting miniatures. Miniatures are very small portraits that can be fitted into lockets, watch covers, and other pieces of jewelry, or displayed on their own. Lida returned to Henderson and took a job with the Henderson school system as an art teacher. In addition to teaching, she painted portraits of different people in the Henderson community.

According to this article in the Evansville Press from June 5, 1938, Lida was inspired to paint a portrait of John James Audubon after reading Donald Culross Peattie’s 1935 book Singing in the Wilderness. She came across an illustration in the book of a miniature portrait of Audubon owned by a woman named Mary Stevenson in Chicago. The story goes that Lida immediately wrote to the author, Peattie, to obtain Mary Stevenson’s address. She wanted to paint that portrait of Audubon on a larger scale.

Lida managed to get in contact with Mary Stevenson and learned more details about the colors used in the portrait. With this information and a copy of the print in Peattie’s book, Lida began working on a 25 x 30 inch canvas portrait based on the 1 ½ by 2 inch miniature. She says in the article that it took her a year to complete the painting, working off and on.

Lida’s finished portrait of Audubon was donated to the new Audubon Memorial Museum on July 1, 1938. The painting hung on display in the museum when it opened for the first time to the public on July 15, 1938. Lida’s portrait remained on display in our galleries for many years, but is now taking a much-needed rest in our collections storage area.

Here’s another thing to note. Though the 1938 newspaper article quotes Lida as claiming that Mary Stevenson’s miniature was a self-portrait done by Audubon for his wife Lucy, we have some doubts about that. Both Lida’s portrait and the Stevenson miniature are very similar to the famous 1831 miniature of Audubon by Scottish artist Frederick Cruickshank. Here’s a comparison between the Lida and Cruickshank’s paintings. We now believe that the Stevenson miniature was a copy itself of the Cruickshank portrait.

Thanks for listening! Check back next week for another Museum Monday video. Stay safe and be well.