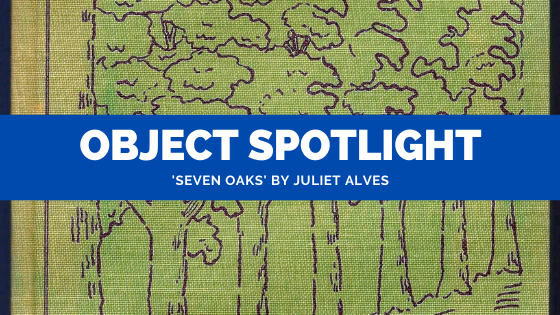 In our Object Spotlight series, we will take a closer look at the story behind an object from the collections of John James Audubon State Park Museum.

On July 15, 1938, the John James Audubon Memorial Museum and State Park opened to the public. The citizens of Henderson, Kentucky, had looked forward to this moment for decades. It started in 1898 with the organization of a local Audubon Society in honor of John James Audubon, the famous artist-naturalist who lived in Henderson with his family from 1810 to 1819. Here Audubon wandered the woods and fields, sketching and studying some of the birds that would later appear in his masterwork, The Birds of America. The Henderson Audubon Society members felt a kinship with Audubon, who had known many of their ancestors, and they started considering ideas for the creation of an Audubon memorial. One idea was to build a museum in Henderson that would share the story of Audubon’s life and art with a wider audience.

It wasn’t until 1936 that efforts to establish such a museum became viable. That year, the State of Kentucky and the Department of the Interior approved a proposal by Henderson citizens to create a museum in the new Audubon Memorial State Park. With a grant made by the Works Progress Administration (WPA) to finance the museum’s construction, the Civilian Conservation Corps (CCC) commenced work on the building in the summer of 1937 and completed the project in 1938. The dedication of the new Audubon Memorial Museum on Friday, July 15, 1938 must have been a joyous occasion for the citizens of Henderson after so many years of dreaming and planning.

One of the ways that we mark significant moments in history is through poetry. Poems inspired by special occasions act as a bridge between the author’s thoughts and feelings about an event and people who read or listen to their words. We can use this type of poetry to help us better understand and interpret the emotional aspects of a historical occasion, which may not come through in other historical records. This is why I was so delighted to come across Juliet Alves’ 1939 book of poetry, Seven Oaks, in our museum collection.

Seven Oaks is a thin, hardbound book with a green cover showing a depiction of seven trees in brown ink. Juliet Alves, the author, published the work through Loker Raley in New York in 1939. It contains 49 poems about nature, family, and life in rural western Kentucky. The poem that caught my attention was one titled, “Listen, Audubon!,” on pages 51-53. Alves notes under the poem’s title that it was “written to signalize the dedication of the Audubon Memorial Museum and Park at Henderson, Kentucky.” Another connection to the museum can be found in the handwritten inscription on the front free paper that reads: “Presented to the Audubon Museum in my home town, Henderson, Kentucky / Julia Alves / Dec. 1939.” So, who was Juliet Alves and what was her connection to the museum?

Juliet Overton Alves (1885-1947) was born to Gaston Mears Alves and May Noland Alves in Henderson County, Kentucky, in June 1885. As a child, she would have most likely been aware of John James Audubon and the fact that he once lived in Henderson. Juliet was around 13 years old when the Henderson Audubon Society organized as a group in 1898. In 1909, she married Robert E. Johnston in Henderson. The couple had two children: Robert Evans Johnston (1910-1912) and William Overton Johnston (1921-1998). Juliet lived in Henderson during the period when Susan Starling Towles and other citizens started advocating for the creation of a museum in memory of Audubon. She almost certainly would have known of their passion for the project and Susan’s efforts to collect Audubon prints and artifacts. In the early 1930s, Juliet divorced her husband and took their son, William, to New York City to seek out a career as a writer. At the time of the Audubon Memorial Museum’s dedication in the summer of 1938, Juliet had published a comedy in one act called, “Tell It To Toots” (1937).

Juliet’s next published work was Seven Oaks (November 24, 1939), a slim book of poetry named after her childhood home, Seven Oaks, in Henderson. Many of the poems seem to center on her memories of family and friends as well as her complicated feelings about the town of Henderson. “Listen, Audubon!” is a wistful poem that acknowledges the act of remembering and celebrating John James Audubon’s life and artistic legacy.

Another interesting connection with the Audubon Memorial Museum comes from a note on the title page of Seven Oaks that states, “Cover and decorations by Barnard S. Alves.” Barnard Stebbins Alves (1881-1950) was one of the architects behind the design of the museum as well as the older brother of Juliet Alves.

The image below comes from a postcard showing an elevation of the Audubon Memorial Museum and the Tea House, surrounded by a decorative border of various birds. You can see Barnard S. Alves’ name in the lower right corner.

Seven Oaks and the poem, “Listen, Audubon!,” are records of one woman’s thoughts about her hometown and the memorialization of John James Audubon’s story through a museum that took decades for the citizens of Henderson to establish. By writing a poem commemorating the dedication of the Audubon Memorial Museum and State Park, Juliet Alves acknowledged the significance of the event for her family and former neighbors. It is incredible that 81 years later, this poem enables us to empathize with her feelings about the occasion. How do you interpret her words? Do you think she was pleased or somewhat sad about the dedication of the museum and park? I’d love to know your thoughts.

Listen, Audubon!
(written to signalize the dedication of the Audubon Memorial Museum and Park at Henderson, Kentucky)

Not we alone
In this home-quarried stone
Are aware of your name,
For from every tree
Birds that you gave to fame
Sing of you over and over:
Your spirit has not flown forever!

Pale gulls above the river,
Gentle wings that dart and quiver,
Stronger wings that rise
In Western Kentucky skies!
They proceeded the pioneer
In clouds that darkened the sun:
They were here when you begun
The dream that you completed:
And then —
Many wings were stilled with time:
They live now only in the lime-
Light of your pen.
But many are about us now,
Homing in every leaf-sheeted
Bough.

Here, the oldest tree
That we see
Is hallowed by the haunting note
From the wood-thrushes’ throat
When, wood-loving, you came,
And the self-same
Stammer
From the flicker’s hammer
Is tapped on the tree’s gray ragged bark,
Though the branches that new the horned lark
Have dropped their leaves for many a year
Since you, young, creative, were here.

O, to have you come again
The way you came!
To have your pen evoke
With every stroke
Each bird by name!

For I have stood beside your grave
Where the shaft of earth —
Tone granite gave
No final word,
Because a yellow-throat
From a pine tree sang of birth,
Making death remote
And living heard.

Yet, you are not there;
You are where
Each tanger sings
Above the sere
Leaf of the year,
Above the springs.

Nor are you here.
You are forever calling,
Calling aloud,
Above the ever-changing,
Forgotten crowd.