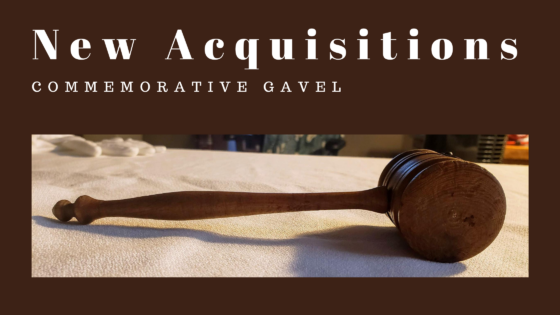 The Audubon Museum at John James Audubon State Park in Henderson, Kentucky, holds one of the world’s largest collections of Audubon art and artifacts. Since the museum’s founding in 1938, we have continued to add to the collection by acquiring new pieces that help us tell stories of John James Audubon’s life and work. In this series on the Friends of Audubon blog, I will share our newest acquisitions and what we know about their histories.

In April 2020, I received a letter from a person in Virginia who wanted to know if the Audubon Museum would be interested in a commemorative wooden gavel associated with John James Audubon. According to the potential donor, a small brass plaque attached to the gavel stated that it is made of wood from a tree inscribed, “J.J. Audubon 1814,” in Henderson, Kentucky. As soon as I read that description, I remembered a similar object in our museum collection: a wooden gavel head (missing the handle) with a metal plaque reading, “From Tree Inscribed ‘J. J. Audubon 1814’ Henderson, Kentucky” (JJA.1999.28). This object was not accessioned when received, so we have no idea who the donor was, why it was made, who collected it, etc. The gavel had intrigued me since the moment I first saw its record in our collections database. Perhaps this other gavel could tell us more, especially if we had information about its provenance (history of ownership).

The potential donor mentioned in their letter that they are a descendant of Egbert Williams Thompson, who was the nephew of Lida Williams. This name — Lida Williams — immediately caught my eye. A few months ago, we published a Museum Monday video on Lida Williams and her 1938 portrait of John James Audubon housed in our museum collection. I knew from my research that she was a charter member of the Henderson County Historical Society and an early supporter of Audubon State Park. According to the potential donor, Egbert remained in contact with Lida for years. Soon after her death in 1949, he traveled to Henderson to settle her affairs. Egbert apparently brought some things owned by the Williams family back to Virginia, which may have included the commemorative gavel. Knowing this connection with Lida Williams and the Henderson County Historical Society offered me a clue to follow about the origins of the two gavels.

Out of curiosity, I searched the Internet for mentions of commemorative Audubon gavels, hoping to come across an auction listing or record in an online museum or archives collection. I was surprised to find a gavel that sounded exactly like ours listed in a digitized exhibition catalog of a February 1935 show on John James Audubon at the Speed Art Museum in Louisville, Kentucky (KOAR). The catalog describes this gavel as “made from beech tree inscribed ‘J.J. Audubon, 1814,’ Henderson, Kentucky. (Handle is of oak).” The Kentucky Ornithological Society loaned it to the exhibition.

Now I had two more pieces of information about the gavels. For one, I knew at least three gavels may have been made, and two, the gavels were in existence before February 1935. So what questions could I ask about the object that might lead me to other sources of information?

I focused on the material — the wood from the tree on which Audubon carved his inscription. Did this tree really exist? Where could I find evidence of the tree and the inscription? It would have been an unusual local landmark in Henderson 100 or so years ago. Maybe someone wrote about it in a newspaper article? And what is one of our best sources in the museum’s archives for the history of the Henderson area in the early 20th century? Julia Alves Clore’s scrapbooks (JJA.1958.1-3).

As I leafed through Clore’s scrapbook on John James Audubon, my eye was drawn to a yellowed newspaper clipping titled, “Suggests Marking Tree Bearing Name of John J. Audubon.” The undated article claimed that there was a beech tree on a property near Henderson known as the old Harbinson Butler Home Farm that contained John James Audubon’s name carved into the bark along with a date. Mrs. David Hart, the article’s author, had traveled to the property with her son and Susan Starling Towles to view the tree and search out Audubon’s name. She declared that the three of them had seen his name and the year 1814 as plain as day. After rhapsodizing about Audubon’s wanderings around Henderson, Mrs. Hart ended the article with a call to preserve the tree.

On the opposite page, I found a copy of a deed titled, ‘Deed to Audubon Tree,” that records the transfer of the property on which the beech tree with the Audubon carving was situated from Mary P. Fuhrer and J. Wood Posey of Evansville, Indiana, to the Henderson County Historical Society on September 18, 1923. Susan Starling Towles, one of the founders of the Audubon Museum, is mentioned in the deed as the President of the historical society.

Here’s what I gathered from these documents. Both the copy of the deed and the newspaper article provide evidence that a beech tree with the carving of Audubon’s name once existed in Henderson. Apparently there was a movement among some people in Henderson to preserve and commemorate the tree, which resulted in the purchase of the land on which it stood. The Henderson County Historical Society was involved. Sometime between the summer of 1923 and 1935, an unknown number of commemorative gavels were made from the wood of the Audubon tree.

My next step was asking the potential donor to email me photos of their gavel. I wanted to compare this one with the gavel in our collection.

From the photos, it appeared the gavel was in good condition. The handle was still attached to the head and the brass plaque remained intact. It was a near match to our gavel, which is missing the handle.

At this point I was very interested in acquiring this second commemorative gavel for our museum collection. To me, the gavels represent the enthusiasm of the early 20th century Henderson community for John James Audubon’s work and his connection to Kentucky. This enthusiasm is an important part of the story of the beginnings of John James Audubon State Park and the Audubon Museum.

However, the decision as to whether or not to accept the gavel was out of my hands. The Kentucky Department of Parks has a Collections Committee that reviews all donation offers to Kentucky Parks museum collections. This committee meets once a month to discuss and vote on potential acquisitions. Using the evidence described above, I made a case to the Collections Committee for the gavel and was pleased when the offer was accepted for our museum. I then contacted the donor to initiate the paperwork to transfer the gavel to us. In early July, I received a package in the mail with the gavel.

More research needs to be done in the future on the commemorative Audubon gavels. Why were the gavels made? What happened to the Audubon tree? How many gavels were created? Who received them? Every object in our collection has a story, but some of these stories remain incomplete. If you know anything about the history of the Audubon gavels, please get in touch with me. I’m interested in discovering further clues about them.

Stay safe and be well this week.