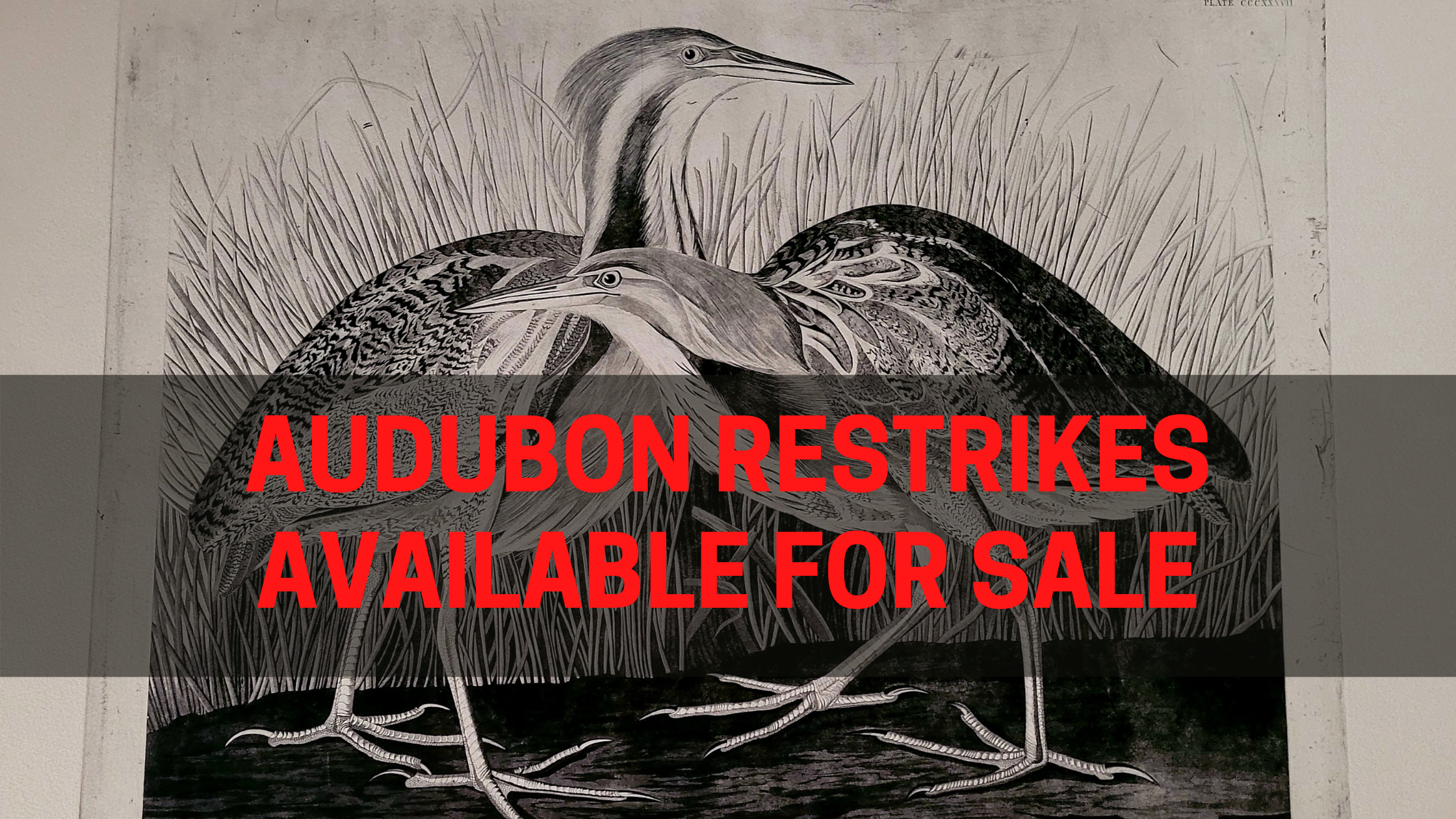 Now available for sale on the Friends of Audubon online shop are restrikes of the American Bittern and Tell-tale Godwit taken from the original engraving plates of John James Audubon’s Birds of America.

In 2002 and 2013, the Friends of Audubon issued limited edition restrike prints from the museum’s original copper plates of the Tell-tale Godwit, or Snipe and the American Bittern by John James Audubon. These restrikes continue to be offered by the Friends of Audubon for a minimum donation of $1,000 with the proceeds designated for the conservation of the museum collection and new acquisitions. A charitable donation certificate in the amount of $500 will be issued for each restrike purchased. Any additional donation for the print in excess of the $1,000 will also be recognized as a charitable contribution to this worthy cause.

You may reserve your limited edition Tell-tale Godwit, or Snipe restrike by contacting museum curator, Heidi Taylor-Caudill, at 502-782-9716 or heidi.taylorcaudill@ky.gov. Please contact her to schedule pick-up or shipping arrangements, and feel free to reach out if you have any questions.

The publication of John James Audubon’s great work, The Birds of America, was made possible only with the technological input and expertise of others. Among those were two skilled engravers. William H. Lizars of Edinburgh produced the first ten images and Robert Havell, Jr. of London, the remaining 425. Robert Havell, Jr. was, in his time, one of the most accomplished engravers in Europe. He was an expert in the technique known as “aquatint.” His brother, Henry Havell, also played a very important part. It was Henry who traced the outlines of Audubon’s original watercolor paintings onto tracing paper. The paper was then placed face down on a sheet of copper coated with a thin layer of wax. Robert cut the image through the wax and etched the plate in acid to establish the engraving. Following this step, Robert began to fill in the shadows and shading, giving the image its three dimensional effect. The delicate shading as seen in the foreground was done by aquatint. Aquatint is accomplished by coating an area of the copper plate with a resin. The plate is then heated causing the resin to crack, opening up minute voids in the resin coating which when again exposed to acid, etched the copper according to the width and pattern of those voids. With expert control of this process Robert Havell, Jr. was able to create the remarkable effect seen here. This whole process, called intaglio printing, uses the engraved, etched, and aquatinted copper plate to strike the black outline and detail of the image, which is then hand colored. The production took 12 years to complete a total of 425 separate images for The Birds of America.

When the publication was completed in 1838, Audubon and his family returned to America. The copper plates were stored in a warehouse until 1845 when a fire destroyed the structure and damaged several of the plates. At that time the remaining plates were taken to the Audubon estate and stored in an outbuilding called “the cave.” Following the deaths of Audubon and their two sons, Audubon’s widow, Lucy, attempted to pay off family debts by selling her home, Audubon’s watercolor paintings, and finally the copper printing plates. When a buyer could not be found the plates were consigned to a metal dealer. After a few years, that dealer, unable to find a buyer, decided to melt the plates as scrap. On that day, William Cowles, the fourteen-year-old son of the foundry manager, happened to observe what was happening. With the help of his mother, they stopped the destruction in time to save approximately 80 of the plates. Several of the plates were then gifted to the owners of the foundry, museums, and individuals. Among the individuals was one of Audubon’s granddaughters.

Plate 308: The Tell-tale Godwit, or Snipe

The plate used to produce this image came to the Audubon Museum in Henderson, Kentucky, through the descendants of the original engraver, Robert Havell, Jr. Though there is no record, it seems very likely the foundry owners may have presented it to one of his grandchildren. Audubon painted the two birds (“Tell tale Godwits”) wading in a marsh on the Halifax River near St. Augustine, Florida, in 1832. Audubon’s assistant, Swiss artist George Lehman, created the background showing the Bulow Plantation.

This restrike print is one of a limited edition of 107 released by the Friends of Audubon of Henderson, Kentucky. The Friends of Audubon had originally anticipated printing 250 restrikes, but the printing process was stopped at 107 after damage to the copper plate became evident. The prints are still numbered as an edition of 250. Each restrike print is authenticated by the presence of Audubon’s seal in the lower left corner. The printing was done on archival paper completely by hand by Professor Michael Aakhus of the University of Southern Indiana in Evansville, Indiana.

The plate used to produce this image of the American Bittern came to the Audubon Museum in Henderson, Kentucky, through a purchase by the Friends of Audubon in 2007. The plate shows two birds standing on a muddy bank against a background of marsh grass. According to Audubon, the engraving for this plate was based on a painting done by his son, John Woodhouse Audubon.

This restrike print is one of a limited edition of 75 released by the Friends of Audubon of Henderson, Kentucky. Each restrike is authenticated by the presence of Audubon’s seal in the lower left corner. The printing was done on archival paper completely by hand by Professor Michael Aakhus of the University of Southern Indiana in Evansville, Indiana.